Established in 1999, the Shawano Athletic Hall of Fame Seeks to recognize and honor Shawano athletes who excelled in the sports that they played. Each year a new class of inductees are selected and added this honored group.

Mark your calendars....the 2021 Induction program will be held on Saturday, September 25, 2021, as part of the 2021 Homecoming celebration at Shawano Community High School.

Congratulations to the 2019 Class of the Shawano Community High School Athletic Hall of Fame! 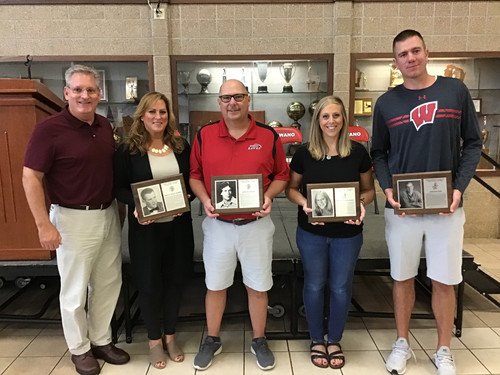 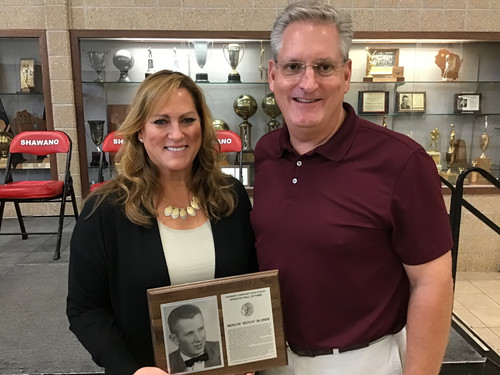 Representing their father, Butch, were his children Greg and Jamie.

Butch was the starting quarterback on the football team in 1953 until an injury in game three cut his season short.  In baseball, Butch was the third baseman and was the second leading hitter on the team in 1953. He lead the team in hitting his senior season in 1954 with a .368 batting average while serving as field captain.

After high school, Butch continued playing football and baseball at UW-Platteville.  He was a two-time Wisconsin State College All-Conference quarterback and team MVP, leading the Pioneer football team to back-to-back state championships in 1956 and 1957.  In 1999, he was inducted into the UW-Platteville Athletic Hall of Fame.

After college, Butch taught HS vocational agriculture at Shawano High School for seventeen years.  Butch helped support local athletics by working as a WIAA high school baseball umpire and football referee.  He coached little league, and was a founding member of the Shawano High School Athletic Booster Club. In 1975, Butch became the UW-Extension Agriculture Agent for Shawano County and served in that capacity until his untimely passing in 1984 at age 47. 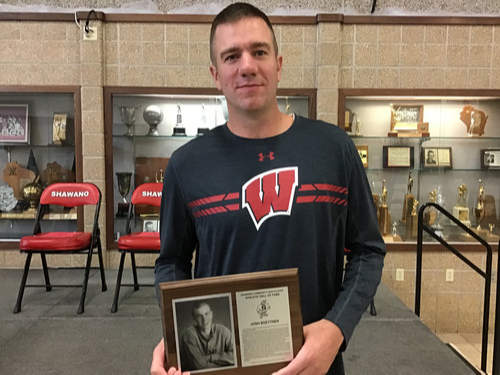 In baseball, Josh lettered in his junior and senior seasons.  He was named as an Honorable Mention All-Conference pitcher for the Bay Conference in 2000.

After high school, Josh attended Michigan Tech on a scholarship to play basketball.  He was a two-time All-American and earned Great Lakes Intercollegiate Athletic Conference Player of the Year honors in both his junior and senior seasons.  He finished his collegiate career as the third leading scorer in Michigan Tech history.  He went on to play professionally in Europe for three years. He played in leagues in Denmark, Switzerland and Iceland, and was named the Danish Elite League Player of the Year in his second season.

Josh returned to Michigan Tech in 2008 to serve as an assistant coach for the Michigan Tech mens’ basketball program.  He currently resides in Houghton, Michigan. 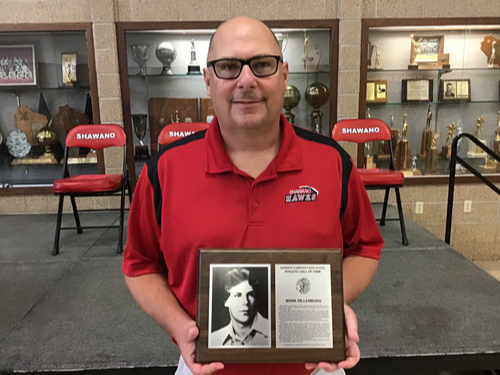 Mark Dillenburg attended Shawano High School from 1976-1980.  He was a three-sport athlete in football, basketball, and baseball all four years of his high school career.

In football, Mark played fullback and defensive back.  He earned varsity letters in his junior and senior seasons.  As a junior, he was named Honorable Mention All-Conference Defensive End for the Wisconsin Valley Conference.  In his senior season, he earned All-Conference honors in the Bay Conference as a Defensive End. He was recognized as Back of the Week by the Shawano Leader for his three touchdown performance against Clintonville.

In basketball, Mark earned varsity letters in both his junior and senior seasons.

In baseball, Mark played catcher, outfield and third base.  He earned letters in each of his final three seasons. As a sophomore, he lead the team in batting with a .324 batting average.  In his senior season, he batted .375 overall and .461 in the conference and was named the Team MVP and All-Conference in the Bay Conference as an outfielder.  He was also part of the Shawano Legion Baseball team that went to state in 1979 and 1980.

After high school, Mark remained active in local sports.  He was a WIAA umpire for baseball and softball for more than 20 years.  He has also coached elementary school and middle school basketball and little league baseball, Babe Ruth baseball, and 7th and 8th grade football.

Currently, Mark is retired and lives in Shawano.  Mark and his wife Becky have two children, Stacie and Tyler. 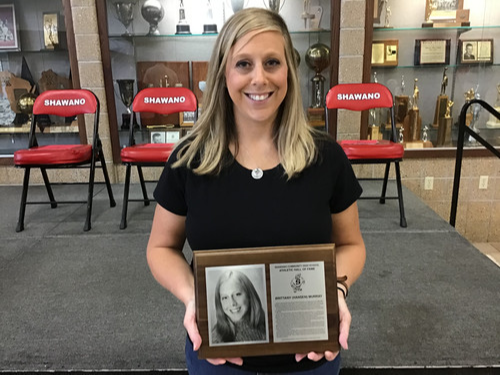 Brittany (Hansen) Murray attended Shawano Community High School from 2000-2004.  Brittany earned three varsity letters as a guard on the basketball team during her freshman through junior seasons, but it was in the sport of softball where she excelled.

In softball, Brittany earned varsity letters as a pitcher in each of her four years.

As a freshman, Brittany earned Second Team All-Conference honors and led the team to a regional title and a sectional appearance, finishing the season with a 12-1 record and a .080 ERA.

In her sophomore season, the team finished the regular season 17-7.  Brittany was named First Team All-Conference, Team MVP, and All-District.  The Hawks advanced through their regional and sectional, and capped off their season by defeating River Valley by a score of 3-0 in the WIAA Division 2 State Championship Game!

Brittany lead her team back to the state tournament in her junior season, earning First Team All-Conference, Team MVP, All-District, and Second Team All-State honors.  She finished the season with 223 strikeouts in 161 innings pitched.

Brittany closed out her outstanding prep career as a senior with another sectional appearance, earning First Team All-Conference, Defensive Team MVP, All-District, and Second Team All-State honors.  She was selected to play in the WFSCA Senior All-Star game. Brittany was also chosen as the SCHS Female Athlete of the Year and Female Scholar-Athlete of the Year.

Brittany continued her softball career on an athletic scholarship at the University of Minnesota-Duluth where she majored in Finance and Accounting.  She currently lives in Suamico with her husband Brian. Together, they have one son, Wyatt, and are expecting their second child this fall. She currently works as an Accounting Supervisor with RR Donnelley in De Pere.